Well I was able to get past my original problems but after 5 minutes of playing with it I seem to have broken it again. With a very simple app with just text in it it compiles and tests ok from within FlashBuilder and when I package and install to my Android emulator set up with Froyo. However, when I add what I think is bare bones application funcionality, it starts to go haywire again. Basically I have a List that I want to populate with XML from a webservice. My initial thought was to use an mx:WebService (which is what I am doing in the browser version). No luck though... WebService doesn't seem to exist in the ElipsFlexSDK. I could always get the data another way via URLLoader so I forged ahead and figured I would just compile in the XML using an mx:XML tag and come back to the remote data access later. 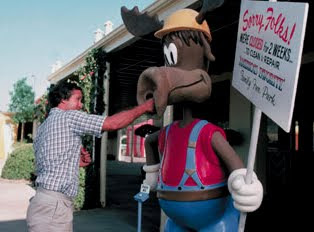 "Sorry folks, park's closed"... This error: "Could not resolve mx:XML to a component implementation" is particularly frustrating because when prototyping, I use this all the time. (If there was a 6 foot moose to punch in the nose I would have). I am not giving up yet though. So I create local variable of type XML and initialize it to a chunk of XML. Voila... it builds again and I can run it in the emulator in FlashBuilder. So at this point all I have to do is package into an APK file.
....Um....no. I get a whole bunch of errors starting with one like this:

This is where I am giving up for now. It just doesn't seem friendly enough for me to start going down this path. The upside of it is that it supports iOS but I am personally starting to care less about the iPlatform altogether anyway. Especially now that I scrapped my iPhone in favor of the HTC Evo... which totally rocks by the way... I missed Flash on my phone way more than I even realized but I really am enjoying it. Plus I now can start on the Klok for Android app... I've said too much already. Stay tuned.
Note: I keep putting "emulator" in quotes because it doesn't appear to really emulate the real Android. It doesn't look anything like what it looked like when I packaged and installed the apk file to the actual Android emulator. This may be because Elips seems to only have profiles for Android 1.6. More importantly, if something works in the emulator in FlashBuilder I would expect it to work similarly in the Android SDK emulator.
Posted by Rob McKeown at 4:00 PM

Thanks a lot for taking the time to test out our product.
For sure everything is not perfect, and we try to improve day after day. We are not promising a full Flex support and so on, but a more "close to the platform approach" : we provides a set of custom UIComponent that are natively mapped right on the real device widgets, like the list (on iPhone your <mob:List will be translated into a real Objective-C iphone List, on android to an android one), so your apps will look like native ones and not "flash or flex" ones.

As for your compilation error this one is a real one, and if you could post the code snippet leading to that on the forum, we would be more than happy to fix it!

Thanks Thomas, for taking the time to respond. I will try to post the code that I think is causing the problem to the forum.

Ok, great, what is your forum ID ? (will help for tracking this issue)
Thx
Thomas

One great feature of having a super bright LED Flashing lights or torch is that it will give bright light using simple AA or AAA batteries . The LED Emergency light will also run longer on these batteries than the regular incandescent bulb strobe light. The brightness of an LED Warning light depends on the power output from its energy source. Super bright dash light used by policemen use about three watts. The lumens or bright light of Police light is at ninety lumens. The power input and output also determines the hours that you can use your batteries with the LED flash lights.